Great group of 22 men this morning.

After a brief 3 minute warm up, we launched into a circuit that included running laps around the track with brief interruptions of “curb hoppers”, decline push ups (merkins/murkins), and “little baby dips”. With about 15 minutes left, we cooled down with Abs and a little more running.

Besides some scary morning hair and “sheet” lines of faces from guys whose head was not far from the pillow, I was too tired to notice anything extraordinary; however, two things that jump out:

1) Not a lot of talking after the first two laps, maybe I just couldn’t hear? And,

2) Through the gloom, during the conditioning circuit, I did notice various silhouettes of grown men with backpacks lagging behind, not talking….

Thanks for your support during my inaugural role as your leader.

#tclaps to O’Tannenbaum on his maiden Q voyage. Extra #tclaps for showing up with “COACH SHANAHAN” emblazoned across the back of his shirt — felt like 7th grade all over again.

Just to be sure we didn’t lose that 7th grade feeling, Q had us launch into the “I don’t know what these are called but it goes like this” exercise. Hey, Coach, that’s called a ‘windmill!’ #oldskool

LBD? What’s a “little baby dip?” Well, that’s a dip done off the edge of the curb…quite possibly the shortest dip movement ever performed.

GRC complement: 2 rucks in attendance. Hey, guys, if you wanna know how much is in the ruck, just grab it off their backs and take it for a spin. Guaranteed good livin’. Take a coupon with you when you go. 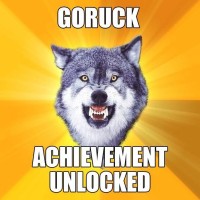 I’m Sorry that I missed O’Tannenbaum’s maiden Q this morning. Still nursing the back after the Saturday. Hope to see all back in the Gloom in a few days.

too many headers on Saturday?

Stong lead this AM. I was surprised that the LBD was called. Intresting concept! Good stuf today!

Great job on Que this a.m. O’Tannenbaum. The reason you didn’t hear any talking after two laps around the track…

PBQB, Joker and Ochco Cinco were sucking all the air out of our lungs as they blew past us. #wheels

I think the little baby dips should become a permanent fixture at The Matrix. Granted, it is one of the smallest body movements known to mankind, but it does concentrate the pain.