Mosey to Shovel Flag for COP

Mosey over to the Parking Lot Hair Burners. Thanks to Double E for bringing the 45 & 10 lb plates. By the looks of the plates before and after this was their first time being used for this type of fun.

Move over to the wall for some active recovery

Take it around the corner for some more fun

Hand off to Hair Band leading the second half

Moleskin: This am’s beatdown covered a little less ground than normal but the pain was flowing. The standard Indian runs and trips around the track were replaced with localized pain stations that were heavy on the reps. Hair burners aren’t the standard fare at Outland but they never seem to disappoint those looking for some exhaustive anguish. However, YHC doesn’t know how to gauge a reasonable distance for this type of fun so the first men through the gate paid the price. Not sure exactly how far you pushed the iron but strong work boys! Apparently, Glass Joe’s been watchin Looney Toons with the kids cause he pulled a “Roadrunner” like move as his feet spun for about 30 seconds while attempting to move that 45 lb plate across the parking lot. (beep beep).

The second half of the beatdown didn’t allow much room for recovery. Each of Hair Band’s sets had to be called to an end at the 10 minute mark. Someone called out part way through the Arm Work that this must have looked much better on paper than it felt going through. (THRUTH) It was tough, it was simple and we’re all stronger for having lived through it. Well done HB! F3 is based on no man left behind, unless The Late Show is caught up looking at the Harris Teeter truck with its Super Double Coupon ad on the side while the rest of us mosey from COP to the Hairburners.

Happy F3 B-Day to our vary own Horse Head!!!  Come out an Join us Next Satruday to help HH celebrate of his one year anniversy with F3 as he leads us through an hour of pain!

You asked for it… Union County is soon to have it’s first weekday workout.  Your Site Q’s will be Hair Band and Glass Joe.   Details will be distributed shortly! 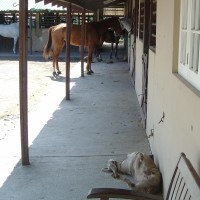 Awesome work by all out there! Since Horse Head had to bail to get better due to BRR and I was the last minute back up I had this weinke saved for an occasion like this. Simple but oh so effective!

Looks like you had as much pain-filled fun as I was having on Mt. Olympus.

Got EH’d Friday night into posting there for the first time. Tough workout.

Then yesterday I decided to do another gear workout at Skunkworks. lol

Anyway, missed you guys and I’ll be MIA again this week doing 16 hours (playing not working) at Carowinds. That will be a fun endurance test to see how far I’ve come. At least it won’t be 95 degrees.

Happy F3 birthday Horsehead! Hate I’m missing you’re 1 hour beatdown. Wait, you like to run too much, so maybe not. Make Hair Band do extra laps in my absence.

I am in the “definitely maybe” category for this Saturday.