Per Q Source, disruption is part of leadership.   Humans tendency is to stay “comfortable” and not change.  A leader realizes that disruption is needed in order to move a group toward advantage.   With that in mind, 13 PAX got to experience another attempt by YHC at disruption.   We also got to learn from failure.  Some examples of my attempt at disruption:

If nothing else, the PAX got in some quality running and a few pain stations.

Mosey up to top of Tartarus where YHC attempted to explain the Equalizer before quickly realizing I am better at showing then telling.     Run down steps and then do called exercise at each corner (four corners)  around outside of football field before turning around and retracing steps to the start.   Idea was to let the PAX turn around as soon as the Rabbit came by on his way back.   The rabbit wasn’t fast enough on the first round so all the PAX made it to the fourth corner and thus still had to do the bear crawls.   I modified for round 2 and 3 to have the rabbit run all the way to the fourth corner and then start the exercises at the fourth corner.  This saved the 6 all of about 10 yards and one set of exercises.

I quickly decided to put the equalizer back into R&D so we moseyed down the short ramps to level 1 for a few minutes of mary before we partnered up for some alternating sprints and exercises.

Round 1 – Sprint and push ups

Round 2 – Backward run and CDD

Round 3  Karaoke and LBC’s

Mosey over to the brick benches for a few rounds of Dips with step ups and decline merkins in between.  Then back to launch point for last 5 minutes with more mary, a minute of burpees, and jump squats.

Nice to see the numbers climb up into the teens with strong group.    Escargot showed up for the start but had to bail during warm up due to bad back.

Icky should be renamed cheetah – fastest man in the 20 yard dash but has to lie down and take a nap at yard 21.

Work week has worn me out so I’m got nothing else except kudos for the PAX for indulging me this morning. 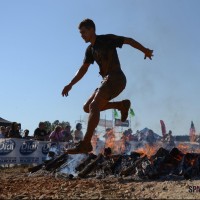 Welcome back Chelms. Solid Q. Just not sure why you put me on the pay no mind list. That hurts man.
Tagalong’s beard was Larry bird’ing him all morning

Darn – I have your name on the list (I will keep it to show you) and forgot to add it. Long day at work so please forgive me. The dog ate the list. My boss made me do it. You were too far ahead of me for me to remember you were there. Your kids are so much smarter than mine. I spilled coffee on the list and your name was the only one blotted out.