8 men showed up to walk the talk and brave The Brave.  The near freezing temps were much appreciated after several days of oppressive heat and humidity.  Oppressive is a relative term, but when you sweat as much as YHC does, anything over 60 degrees is obnoxious.

Mosey to traffic circle next to Wells Fargo building

Mosey North on Comm House, stopping at corner of Endhaven for 10 merkins IC.  Continue to SpringHill Suites parking lot, stopping for 20 MC IC.  Right on Johnston to McAlpine Creek Greenway parking lot, stopping for 20 flutter IC.  Enter Greenway and bang a right to go under Johnston, then eventually exit left on the path that spits you out next to Pike Nurseries.  20 dolly IC in Pike parking lot.  Mosey on path behind large pond just South of Pike.  Find way to large traffic circle at the center of Atkins Circle apartment complex.

Cross Johnston at crosswalk and mosey all the way home on N. Comm House.  In total we got in somewhere between 5.5 and 6 miles.

Pro tip: read backblasts.  YHC had that self-righteous feeling that comes with talking a workout to new territory, only to find out after-the-fact that Frasier Q’d basically the same route once.  And by once I mean three weeks ago.  What are the CHANCES.  Had I only read the backblast…  It gets worse; Wild Turkey, YHC’s creative kindred spirit, and the only member of the PAX to post at both workouts, was surely thinking the entire time that YHC was a hack.  YHC now needs to redeem himself with a future Q on new territory (an increasingly difficult task in SOB Land) with an innovative premise and questionable decision making.

Great job by all PAX.  We had a tight formation and there was hardly any time spent waiting for the 6.  Cobains for getting us back to launch 2 minutes late.  It was a direct result of taking a wrong turn into Tagalong’s beard and spending several minutes trying to find our way out.  That thing is like the wardrobe from Narnia. 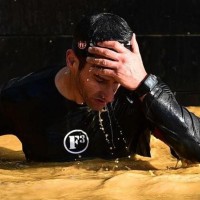