You will make time for what is important to you.  It was clear this morning that pax were committed to making health and connection a priority in their lives as 30 men showed up to push themselves mentally and physically.  That said,  I didn’t anticipate 30 some pax as I was putting my Weinke together in my head the night before,,,  I assumed 12,15….Maybe 18,  all of which I was prepared to give a solid beat down, mixing coupons and partner-work for 45 Min.  As I dropped off the coupons, bumped into our brother Goodfella on a pre-run and headed back to the launch point.  At first,  looked like about 11-12 dudes ready for punishment,,, just as i had planned for it,  awesome!  Then more pax came in, and more, and more. =My plan was looking a bit….shot

Warm UP: Mosey around the lot, get a little jog in so I can come up with a new plan,  oh wait,  one more comes in on two wheels,  keep the mosey going.  Head to the front of school,  25 SSH’s, some merkins,  Mountain climbers, something else.  DANG this is a big crowd,  what is this a convergence?? Did I miss something, Nope this is F3 Waxhaw and  clearly the plan for this and 9 coupons isn’t going to cut it for this hungry crowd.  =Time to improvise.

The Thang:  Light poles,  simple yet effective.  Pick an exercise and we are going to run these 6 lights for 20 min and give these men what they came here for.  1 set 10 Merkins, Second set, 10 lunges, 3 set burpees, 4 set Partner pull ups, 5 set CDD, by the way my partners Nails and Point Break killed it.  Everyone worked hard, seemed to be getting their monies worth but there was still….Time.  Can we modify some of my plan, yes,  two groups,  hand the reigns off to Goodfella to take one group to do a lap of Indian run Worm burners with 5 merkins while another group did a round of smash balls merkins and a lap. Worm burner group comes around and flap jack.  Just enough time to head back.

Mosey back for a quick…Kinda jail break to the launch point.  Goodfella made some pax carry the coupons back so he gave them a little extra challenge:)  END

Moleskin:  Lot of regulars and a lot of Cotters (i think that is how you spell it) WELCOME BACK.  Everyone worked hard,  keep coming for those that made it out for the first time in a while.  Culbertson Middle has two sites on Fridays 515 and 530 as well a Waverly (Viva Chicken)  at 530 for those a little more north.

Toothbrush and soap collection:  I think its Dancing bear and Bottlecap 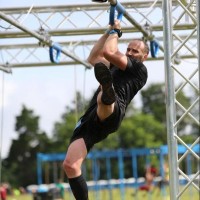